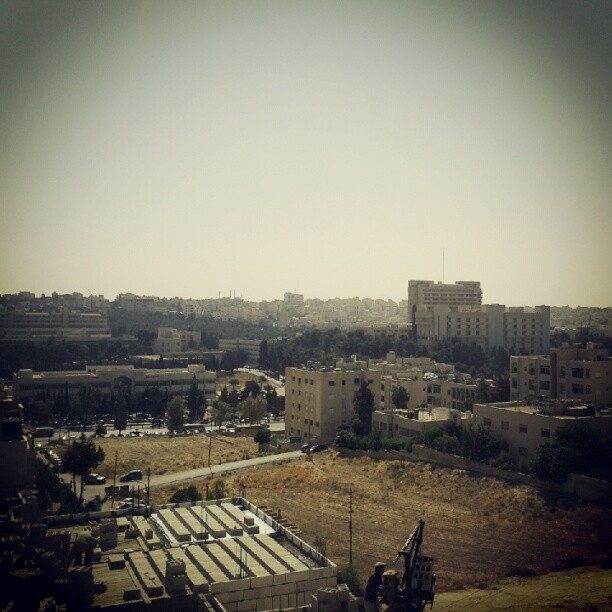 Still in Amman and it’s still just as noisy and crowded and hot and dirty as ever, but I like it. A lot. Except for the heat, but at least there’s no humidity and not many mosquitos and I have AC at night. In other words, the weather is still better than last summer in Northfield. Alas.

Sunday was our first day of classes at Qasid, a well known institute for teaching Arabic. The environment there is very conservative — many of the men have beards and dress in an Islamic manner (I don’t actually know what Islamic dress is called…) and all of the women professors wear the Hijab. I’m taking either two or three classes depending on how you count things. I’m taking a class in Jordanian dialect, Modern Standard Arabic, and Arab Media (which is part of the MSA class). Initially, I was placed into the beginner dialect class and the intermediate MSA/media class.

Turns out the intermediate class was going to spend the first three weeks covering things I’ve already learned (and sometimes forgotten) and the Media portion of the class seemed much easier than my Media Arabic classes at Carleton.

Fortunately, I talked to the director and I’ve now switched into the Advanced MSA/Media class, which means I actually have homework that takes time now. Tonight, for example, one of my assignments was to interview three Jordanians about their opinions of the Arab revolutions and write a report on it. Needless to say, I heard some interesting things — one said Egypt was better off with Hosni Mubarak, and another said Iran is a larger problem in the region than Israel. I’ve been in this class for a day now, and it’s much better: instead of talking about how to read news articles, we read some and watched a clip of al-Jazeera. Very similar to at Carleton, but faster, and with an additional textbook.

The classes here are much faster paced than at Carleton or Lebanese American University. For example, we’re planning on covering a chapter of Al-Kitaab 2 every 5-6 days. For those of you who haven’t studied Arabic, that’s really fast. In a 10 week term at Carleton, we covered two chapters.

To do this, we have three hours of MSA/Media Arabic, an hour of Jordanian dialect, and half an hour sessions with our speaking partners every weekday plus weekly language socialization activities and probably other things to come. Plus an expected 3-4 hours of homework every night. Oh dear.

Coming soon are pictures from our trip to Salt and hopefully other activities. Unlike at LAU, we only have one scheduled excursion, and are left to our own devices to explore Jordan this summer. This weekend some of us might be going to Umm Qais in the Northwest of Jordan, at the border of Jordan, Israel, and Syria. That should be fun.

Also: we’re only allowed to speak to each other in Arabic. Always.

Today we actually left our neighborhood, for the very first time. 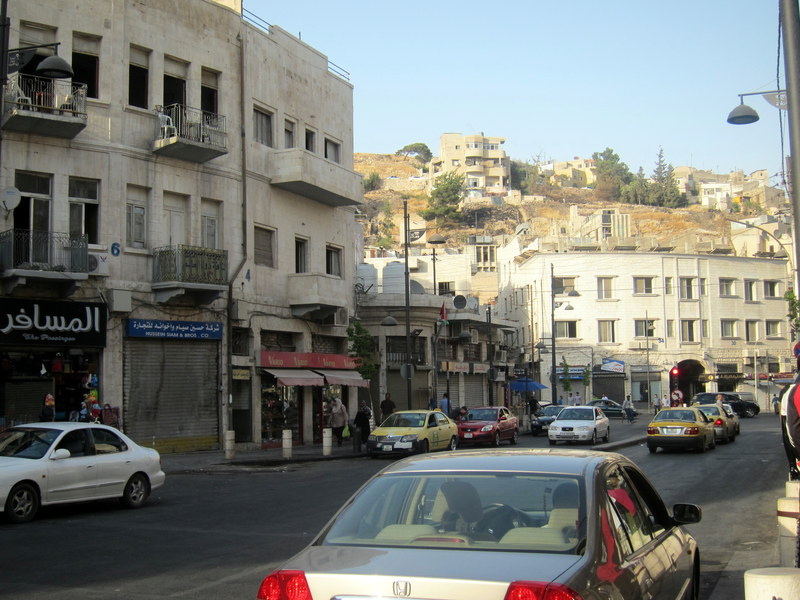 We went in groups with our speaking partners to Rainbow Street and Wasat al-Balad. There’s a fairly well-known market in Rainbow Street called Souq Jara that is pretty touristy, but other than that they are very sha’bi neighborhoods. Literally that means popular, but a better translation might be something like working-class.

These neighborhoods reminded me a lot of Tripoli in Lebanon. Crowded, dirty, and busy. I had falafel and hummus for the first time in Jordan from a comically cheap restaurant — less than $1.50 for more than enough falafel and hummus. 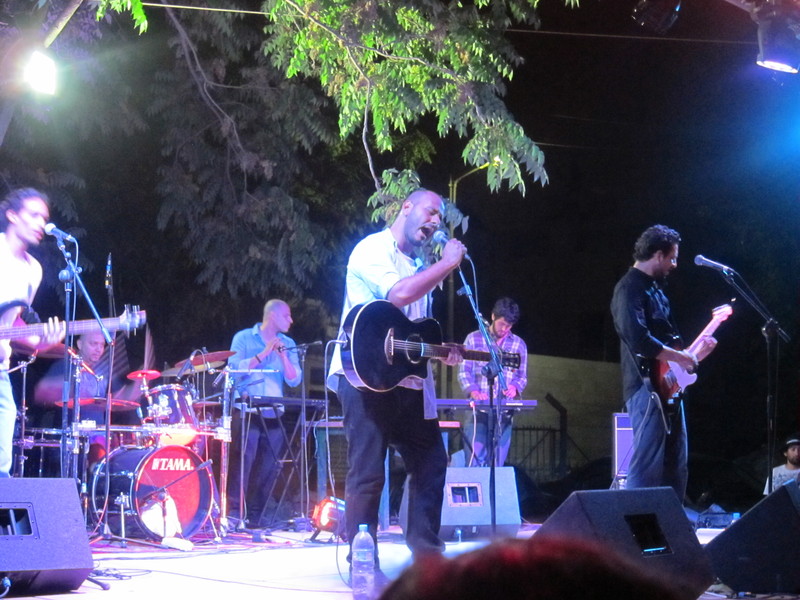 There was also a concert by a local Jordanian band at Souq Jara: JadaL. The most surprising thing about the concert (to me at least) was that they paused the concert in anticipation of the call to prayer. It was good though. I don’t instantly like them as much as Mashrou3 Leila or Adonis, but still a lot of fun. Also I think both Mashrou3 Leila and Adonis are going to have concerts in Jordan this summer, and I really really hope they’re while I’m here, because if so, I am going.

The concert was also the first time I really saw Amman as beautiful. It’s a great view. 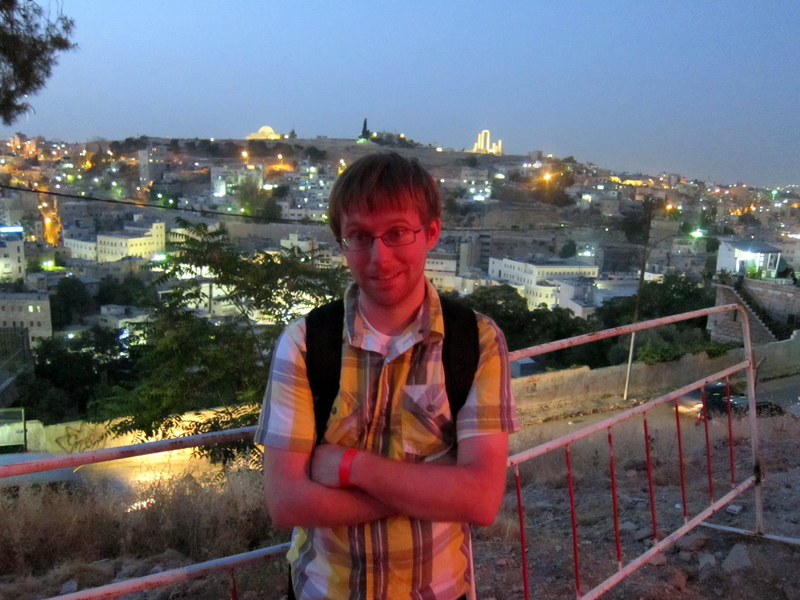 This will serve as proof that I’m actually in Jordan. This is also the most frequently I have ever updated my blog. Don’t get too used to it, I can’t promise I’ll keep it up. 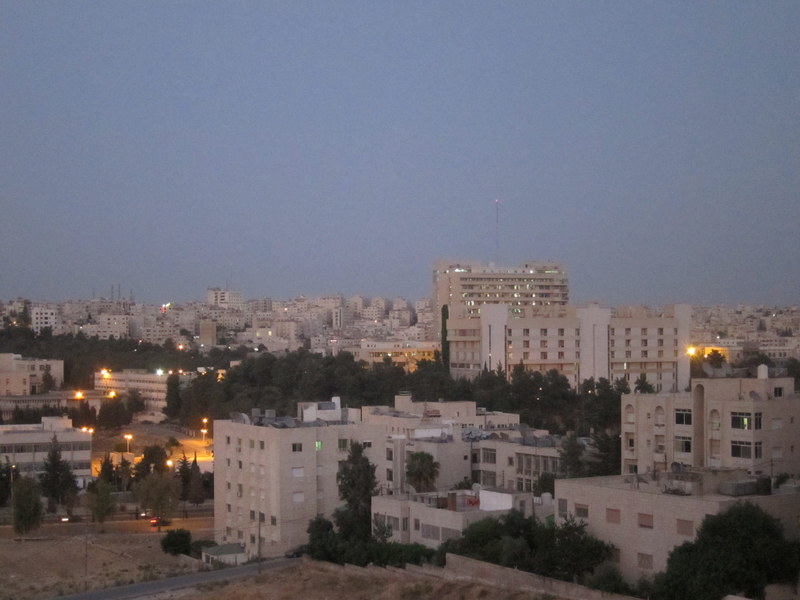 We all survived the flight, despite a terrifying dip as we approached the airport and then a substantially delayed landing. Above is a view from the balcony of ACOR, but more on that later.

So, Amman. A few comparisons to Beirut:

Nonetheless, I like it. I’m living in an apartment with five other people near ACOR, in the Tlaa’ al-Ali region. The apartment is sort of falling apart, in a way that will probably become endearing. For example, the ceiling light in my room is held up at a precarious angle by a single screw. We also don’t have a shower curtain, the kitchen smells, and the internet is unusably slow. Alas. At least we have air conditioning.

All of the women are living in ACOR, which is also where we’re having all of our orientation activities (and where I’m going to go for internet), including a crash course in Jordanian Arabic. It turns out Jordanian Arabic (at least the urban/Palestinian dialect) is much closer to Lebanese Arabic than the flashcards we were sent to prepare led me to believe. Hamdillah.

Also, Amman is really really really hot (and dry!) during the day, and we live on a very steep hill. I felt dehydrated and exhausted just from walking to and from the store and our apartment to buy water. Once the sun sets however, the weather is gorgeous. It’s much cooler and there’s a very pleasant breeze. 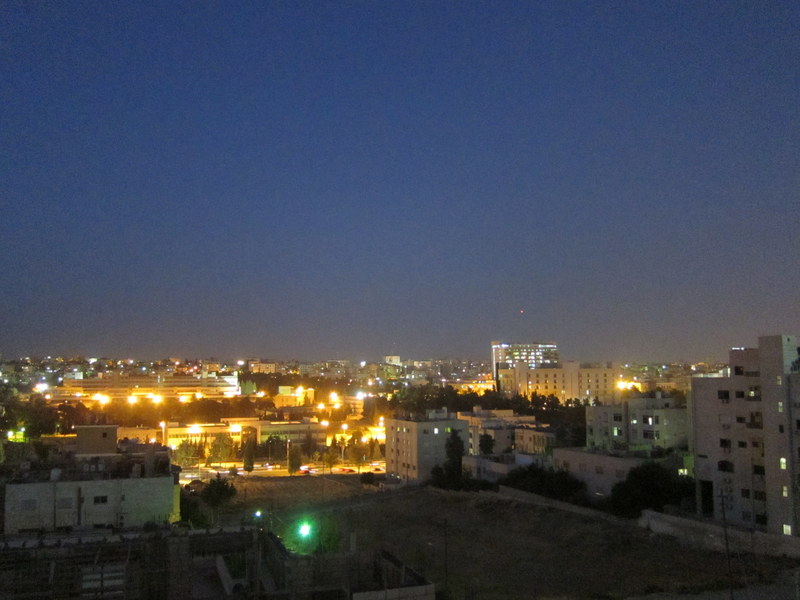 Same view (more or less) from the ACOR balcony, but after dark.

As for the program itself, so far we’ve just had orientation and met with our speaking partners for the crash course in Jordanian Arabic. The program already seems more intense than SINARC was, and it’ll likely get much more so once we start classes at Qasid. I’m excited.

Tomorrow I fly to Jordan to study Arabic even more. I’ve already been in DC for orientation — I left outrageously early the morning after graduation.

I’m going to be in Amman on the Critical Language Scholarship studying Arabic even more intensely than when I was in Lebanon. I’m going from 8–9 hours per week of classes at Carleton to 20+ hours per week plus lots more homework.

I’ll be in Jordan until 12 August, at which point I’m hoping to travel to some subset of Lebanon, Egypt, Israel, and Turkey. Probably Lebanon, Egypt, and Israel assuming I can get in.

I’m really good at relaxing after graduation. Once I get there, I’ll start writing and taking pictures of all the relaxation I’m doing. Be excited.

If you’re interested, subscribe by email, or RSS, or just come here all the time. You can also view all posts about my trip here.

Yesterday I graduated from Carleton College. Some people gave speeches, I shook some hands, and it was really hot.

It turns out I also made some friends in the past four years at Carleton. 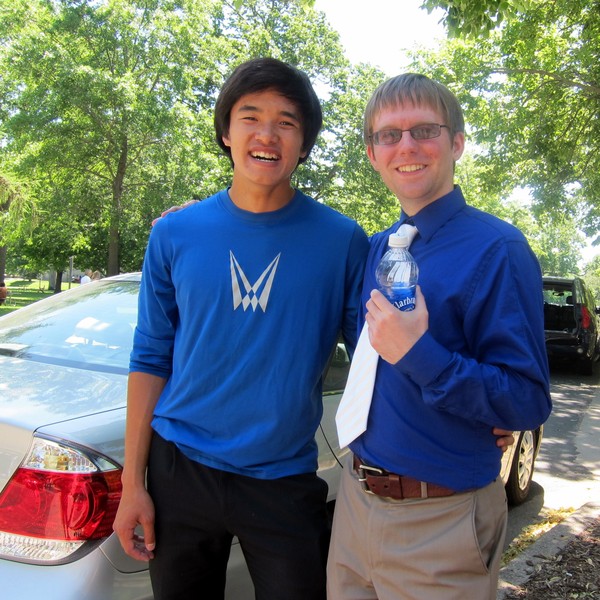 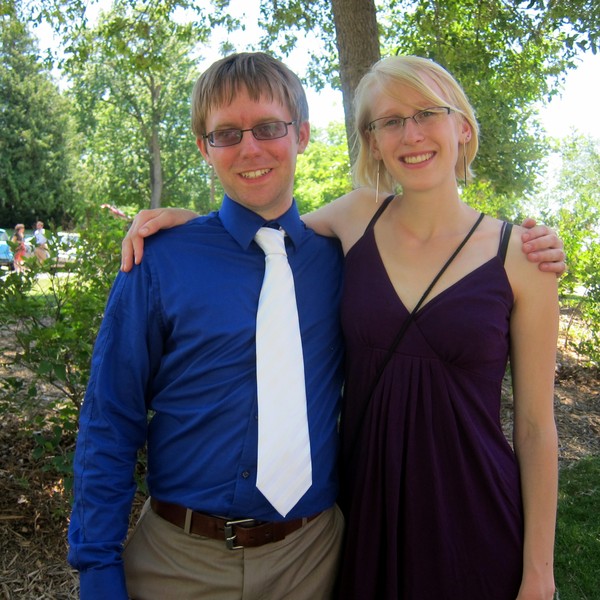 In all seriousness, Carleton was an amazing experience. I had tremendous opportunities, got to know really wonderful people, and even learned a few things.

The people and experiences I’ve known at Carleton have done a lot to shape me into who I am today, and I think that’s a good thing. 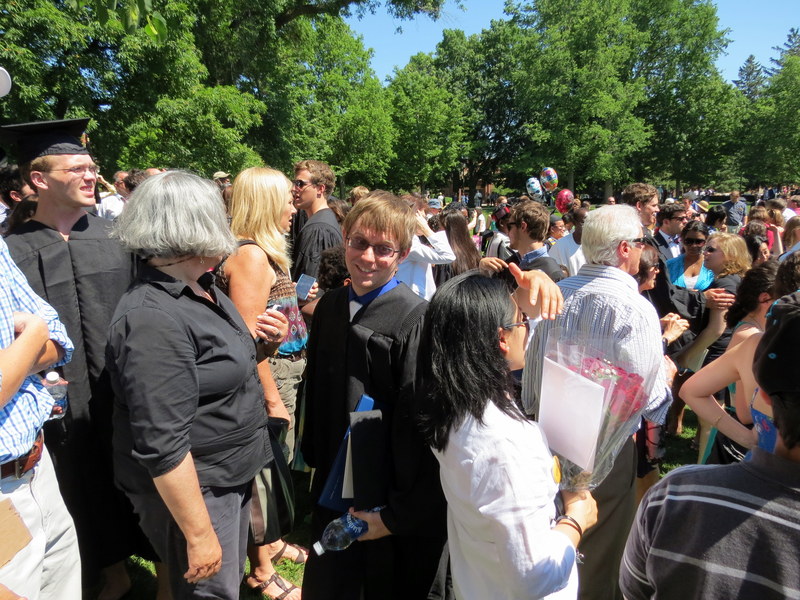 Bye-bye Carleton: it was great.